GIRLS TENNIS Opening the season 4-2, the team is currently in third place. 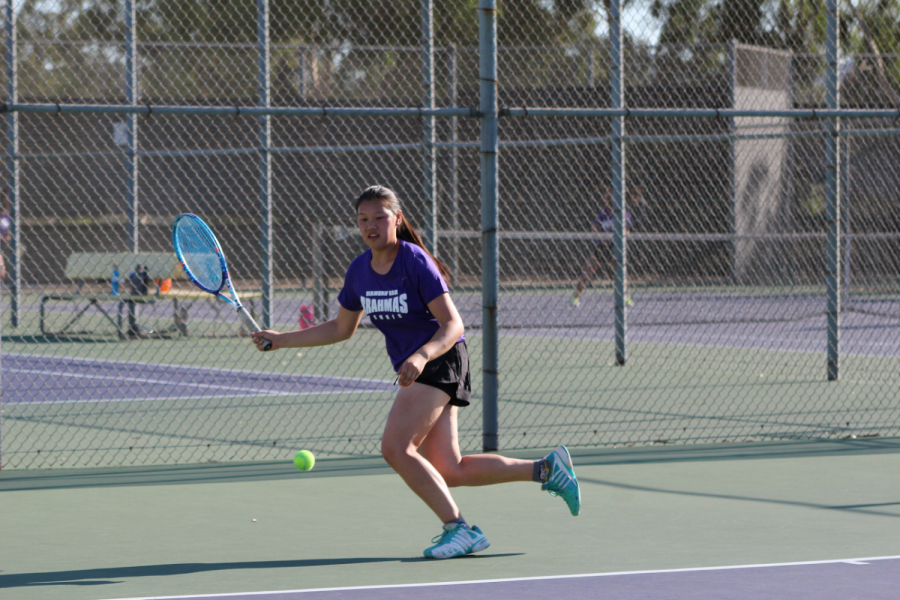 Senior Tiffany Liew returns a serve in a win against South Hills.

After a rocky  preseason, the Diamond Bar girls tennis team started the year strong, with a current league record of 4-2.

“We haven’t been doing bad considering we lost an important player [Jaida Wilson], but [in] preseason, our scores were really tight. So it wasn’t bad,” senior co-captain Angeline Cheng said.

The girls’ preseason was plagued with  close matches, but they lost all four. The Lady Brahmas lost 12-6 against El Dorado High School, won in a tiebreaker against Wilson High School and lost 10-8 against Walnut and Sunny Hills.

“Some of the other schools have just gotten a lot better and have had some new talent, which makes it more challenging for us. For the most part, I have been really happy with the way we have been playing. Sometimes the scores aren’t representative of the way you’ve been playing,” head coach Alexis Feix said.

The Lady Brahmas, however, had more luck in their league matches. The girls’ strong start after winning their two league games against Bonita and Glendora, 11-7, the team hit a bump when they were outplayed by Ayala 17-1.

Although the girls made up for the loss in a win against South Hills, the team faced another challenge when the lost against Claremont.

“[Ayala is] a very strong tennis team, and we lost to them first round this season. However, we are hoping to really put a dent in them the second round,” senior Nikita Deng said via text.

The team placed third overall in league last year, a significant improvement compared to being tied for last  the year before. This year, Cheng hopes DB can place higher than third place as she feels the doubles teams have grown stronger. Other players on the team said they believe that the team has grown as a whole, both physically and mentally.

Deng stated that during the off-season there was a greater emphasis on mental growth to help individuals grow stronger in their skills and confidence. She said that this mentality has helped with the overall growth of the team due to the individual members improving themselves rigorously.

“We would love to make it to CIF. Not to jinx anything, but I think we definitely possess the capabilities of making it even further in CIF than last year this season. We have a litany of strong players ready and determined to win,” Deng said.

Feix commends a number of the underclassmen this year for stepping up to plate and taking ownership of their roles on the team. Junior Ellie Delano made progress as a singles player this year and has improved her skills greatly. Junior Megan Young moved up from JV last year and has put in her full effort into practice. Sophomore Lindsay Kashiwabara has also made great progress as a returning varsity player.

The Lady Brahmas will face off against Bonita and Glendora again in the second round of league matches in addition to matches against  Claremont and South Hills. They will look to redeem themselves against Ayala tomorrow.