Homecoming Review: An event that caters to dancers 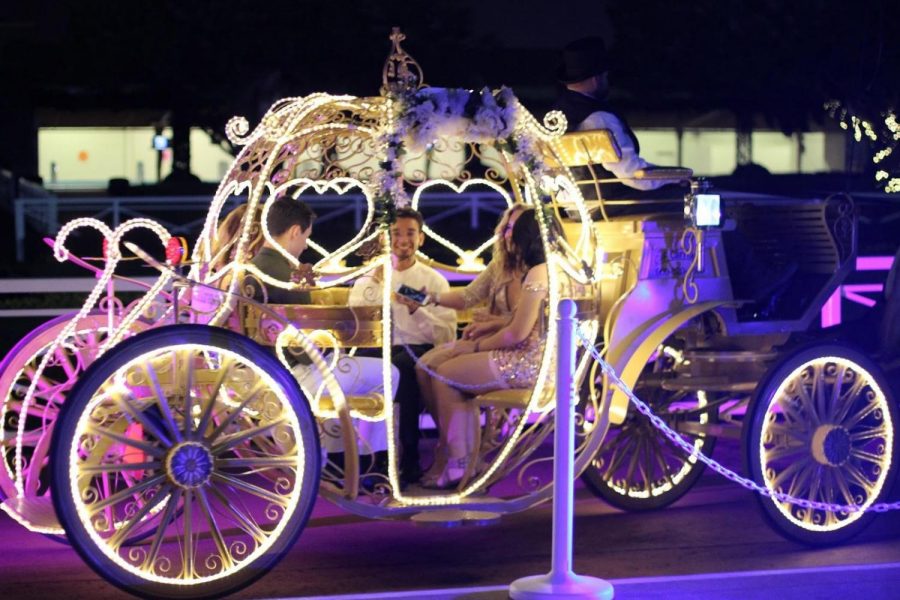 This year’s homecoming offered carriage rides as its main attraction.

As an introvert who shies away from most social interaction, my opinions on Homecoming likely differ from those of many other students. People who enjoy dancing and socializing will have the time of their lives at Homecoming, but while I definitely had a wonderful night, mainly due to getting to spend time with my date and my friends, the actual event was not an ideal setting for someone like me.

When my group first arrived at the Santa Anita Racetrack, I was hit by the blaring music coming from the dance floor and the smell of horse manure. Although we didn’t arrive until after 8 p.m., there was still a long line to get in, and we didn’t actually get into the venue until a little after 8:30 p.m.

The venue consisted of two levels: a covered upper floor with the dance floor, bar and food tables and an outdoor lower level with activities such as karaoke, temporary tattoos, flipbooks and horse-drawn carriages.

The food tables offered a variety of snacks and small pastries, and the dance also offered Italian ice, catered by Frostbites. .

The carriage ride was one of the highlights of the venue, perfectly matching the “Once Upon a Time” theme, although it only lasted about two minutes. Also, I was disappointed that we did not actually receive our flipbooks. We were told to pick them up at the end of the night, but when we returned we were told that they would be distributed at school.

The lighting in the venue was pretty, emulating the atmosphere of Disneyland, and the lit-up carriages added a nice touch to the ambiance by making everything seem more whimsical and fairytale-like. Overall, the venue was a good size considering the number of students in attendance, as it felt neither crowded nor empty.

My date and I spent very little time actually dancing, except during the only two slow songs that were played during the dance. I was drawn away from the dance floor by the overpowering music and unnecessarily bright lasers that gave me a headache after a while. The DJ did not play any songs that I particularly liked, but this was expected as my music taste does not typically include rap or electronic music. Another factor that kept me from the dance floor was the number of students dancing provocatively, something I had heard about, but was not prepared to see for myself.

Therefore, much of my night was spent sitting, walking around and talking to my date. I was perfectly happy with this arrangement, but I feel like we could have been able to communicate more efficiently in a different, non-Homecoming setting; it’s not easy to hold a conversation when music is pounding nonstop in the background.

While I am glad that I got to experience going to Homecoming at least once in high school, I will likely consider anti-Homecoming options as a preferable alternative in the future.