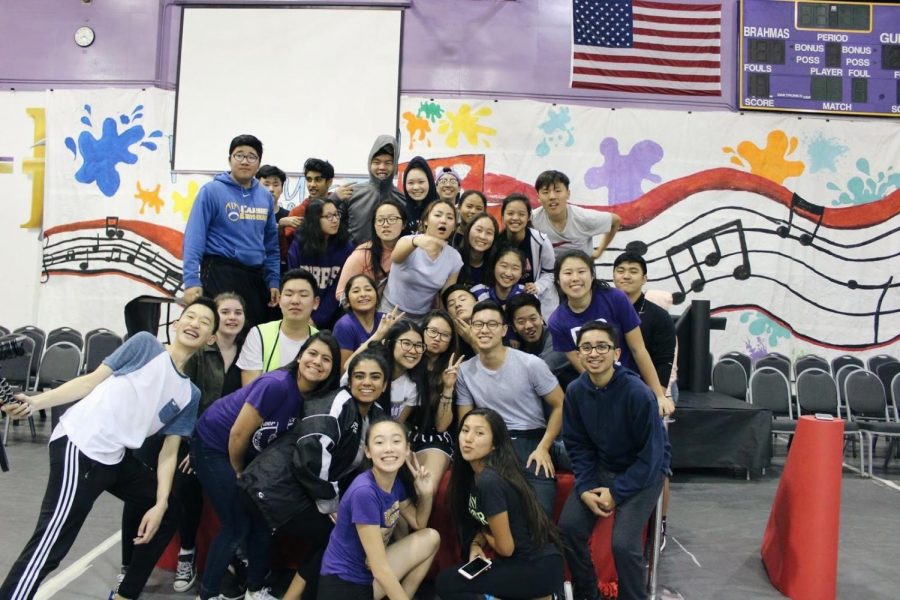 The 2017 USB plans school activities such as the Branding Iron and the performing arts rally, pictured above.

Behind the scenes of every event where Brahmas bleed purple and gold lies one of the most spirited groups on campus, working for hours on end to ensure everything from Homecoming game night to school rallies runs smoothly.

While these students are often the brunt of jokes from both other students and teachers for getting out of class to set up for events or carry out other duties, they aren’t  recognized enough for the effort it takes to participate in this group.

On a typical night, Diamond Bar High School’s United Student Body can be found setting up for an upcoming event or attending a function hosted by one of the numerous extracurricular organizations on campus.

USB, under the supervision of Activities Director Van Horn, is constantly at the scene of football, volleyball, and water polo games. Athletics aside, USB members attend drama productions as well as choir, band, orchestra and dance concerts. At the end of the year, the group also watches the drumline and color guard showcase performances.

“We also like to show our support for the new events that different programs provide. I know that the USB as a class [attended] Ted Talks,” said senior Janice Lee, USB commissioner of Assemblies and Rallies. “We do our best to attend as many events as we can.”

However, it takes more than student support to keep school spirit up throughout the year. Event planning is a time-consuming task, often beginning several weeks or months prior to the day of the occasion.

“Essentially, all events are planned by a commissioner pair,” said Hampton Douglas, senior class president. “They present the event to USB with a general plan [and] ask us for ideas for activities, themes and poster ideas. From there, the commissioner pair will work on execution for the day while everyone else will help make posters for advertisement, props or whatever else is necessary.”

Preparation for most activities include creating and distributing flyers, setting up audio and ordering appropriate props from various companies.

Among the common events USB plans throughout the year are Spirit Weeks, with at least two occurring per semester. A relevant event outside of school may also prompt a spirit day, such as the Pink Out Day in October to support those affected by breast cancer. Ideas for spirit days are influenced by what students request, as members of USB bring in ideas they have heard their peers suggest to roundtables–event-planning brainstorm sessions.

According to senior rally and assembly commissioner Carissa Martinez, rally planning starts two to three months ahead of the event. After hosting a roundtable discussion to determine the theme, Martinez works with Lee to lead the preparatory work. The night before the rally, USB members spent five to six hours setting up the gym and then add any additional finishing touches the following morning before school starts.

“In USB, we truly do form bonds that’ll last a lifetime. We spend hours together on a daily basis so it would make sense why we can get so close,” Douglas said. “However, sometimes I wish I wasn’t behind the scenes so much. Sometimes, I just want to enjoy the event rather than make sure nothing goes wrong.”

Aside from the more common events scattered throughout the year, annual dances such as Homecoming and Prom typically require planning to begin six to seven months ahead of time.

Most of the work for these formal events are taken on by the special projects commissioners, who search for venues and plan the activities. They also communicate with numerous companies to search for suitable provisions for the themed dances.

“[Participating in USB] was the best decision I’ve made throughout my high school career, and it has taught me so many things like how to be the best leader possible, responsibility and organizational skills” Martinez said. “I’m honestly really sad because USB has been a huge part of my life since second semester of sophomore year and I’ve met so many amazing people that I won’t see everyday anymore.”

The seniors, some having been in USB for one year and others for all four, will be retiring from their duties after the 2017 semester ends. The last project they worked on was the rally last Friday.

“This is the one group that I’ve been constantly dedicated to,” senior USB president Hailey Shi said. “It’s very bittersweet [to leave] because even though it’s a lot of work, it taught me a lot and I think that it’s going to be a little empty inside because as a second semester senior you’re watching other people in USB doing what you’ve been doing for so long.”

As the end of the 2016-2017 term is approaching, USB recently added new members.

Every year, freshman, sophomore and junior apply for the group’s 18 to 20 commissioner positions and are chosen through a series of interviews with the new E-board staff.