Looking to repeat its winning ways 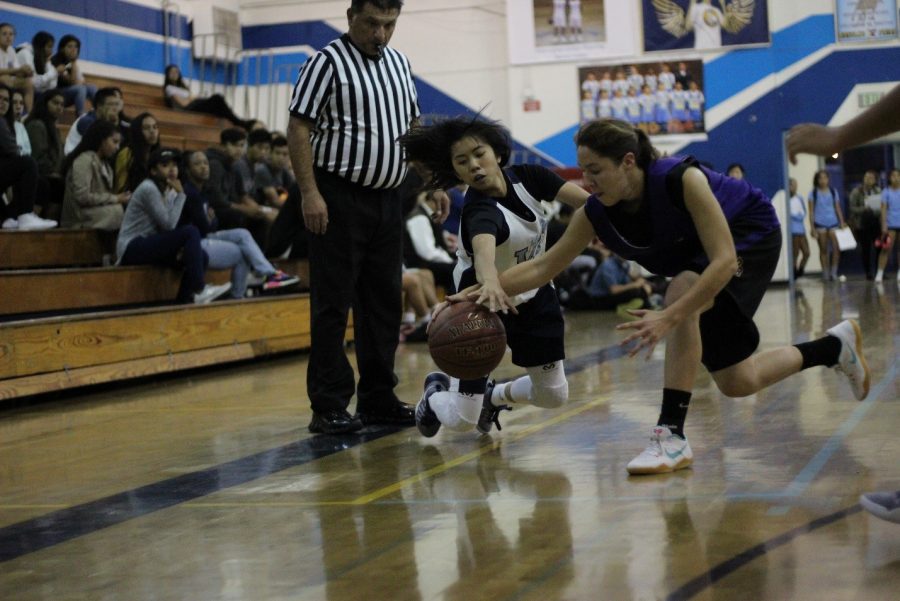 Sophomore Joanne Mize steals the ball from a Mustang during a scrimmage.

After finishing last season with the best record since 1996 and reaching the CIF semifinals, the Diamond Bar High School girls basketball team is preparing to face off once again against the top schools in the division.  Starting off on the right foot, the Lady Brahmas defeated Valencia last week, 56-32.

“I’m pretty confident but I know every night is going to be challenging,” senior captain Juliana Gamboa said via Facebook. “We’ll fight through and hopefully come out on top.”

Currently participating in the Wilson tournament, the Lady Brahmas will compete in the San Dimas tournament next week and the Don Lugo tournament over winter break, then continue to play several non-league games until league begins on Jan. 10.

Many Current players have stepped up to take the positions left by last year’s senior starters. Senior captains Gamboa, Candace Black, and Lauryn Del Campo are expected to lead the starting lineup.

“The sophomore class has a lot of good players so they’ve kind of come up in the field a little bit,” McCabe said, naming sophomores Angela Hung, Kayla Hunt and Joanne Mize as a few players who have stepped up this year.

The Brahmas have prepared by playing in the summer and fall leagues, against some of “the best teams in Orange County” in the Valencia League before the season began, according to McCabe.

In addition to the games, the team has been working in the weight room and on the track, according to assistant coach Erica Younge. The girls have also been focusing on the 11 Man Drill, which mostly involves three-on-two practice, as well as one-on-one drills.

“We also went over a lot of plays in the gym and are just trying to build chemistry with each other since we’re such a young team,” Gamboa said.

The team has made a major adjustment this year regarding its defense. The Lady Brahmas will be implementing  man-to-man defense rather than the zone defense they have used for the last four years. This change was due to the loss of previous years’ larger, taller players in exchange for smaller but quicker players.

“This year’s team could be one of the fastest teams in years. We’re very quick and it looks like we’re going to have some depth in the bench, not just at the top,” McCabe said.

Gamboa and Black are returning All CIF players, while Del Campo was an All-League selection last year. Junior Jessica Barrera is back as a starter for the third year.

“We’re in a very tough division so we hope to do as well or better,” McCabe said. “But it’s much tougher than it was last year, and it was tough last year.”