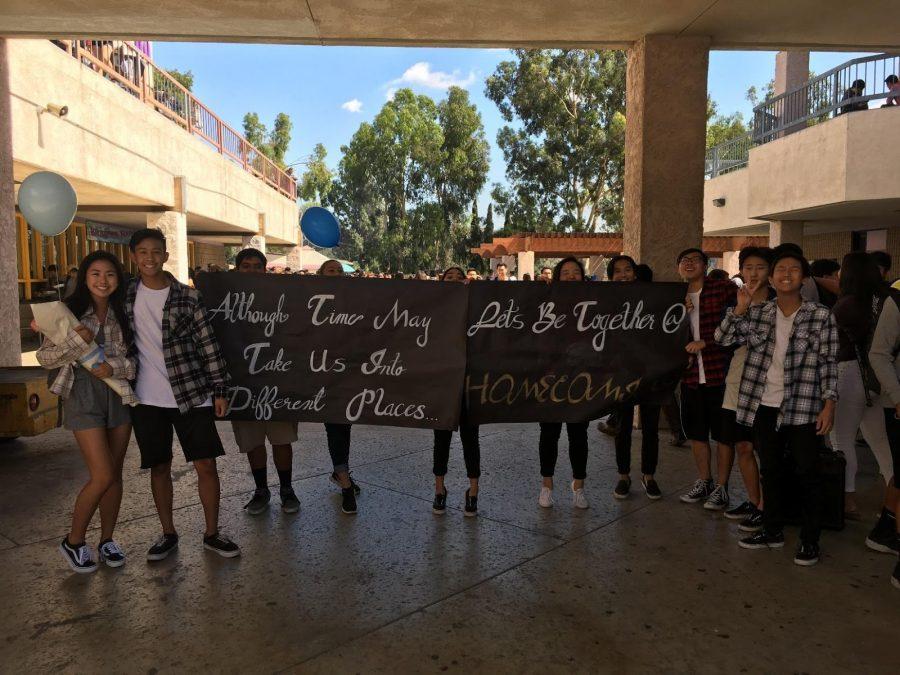 With a shining, shimmering and splendid night right around the corner, Diamond Bar High School students brought out the flowers and posters to ask their prospective dates out for a magical night.

Dancing his way to a date, sophomore Seth Gabriel enlisted the help of his fellow All-Male members to ask freshman Carina Wu.

“I was constantly thinking of something I could do to be different from other people. I asked my friends if they could help and it all came together,” Gabriel said.

Gabriel asked her friend to lead her to the lower lunch area while he arranged the dancers’ performance. The song Gabriel danced to was “Cold Water” by Major Lazer. The poster was also inspired by the song.

cole Song with an at-home asking. In a “Romeo and Juliet” style scene, Liang had his friends hold
the poster on the street while a mutual friend called Song and asked her to look outside her balcony window. Another friend then took nickels and tossed them at her window to have her step outside.

“I haven’t seen any posters in the form of a check. I thought [it] was really creative and cute,” Song said via text. “I’m looking forward to spending time with him and my friends, and overall just enjoying what USB worked so hard to put on.”

Senior Brian Park asked senior Emily Mai after her drumline practice, having another member rush in to the band room to tell her that her friend fainted outside. When she ran to the amphitheater, several of Mai’s friends were holding balloons with “pop me” written on them. Inside were small notes that spelled out “Homecoming,” which she pasted onto a poster board.

“He gave me a succulent instead of flowers. I actually had no idea that he would ask. I was pretty surprised,” Mai said. Aiming to win USB’s cutest asking contest, Junior Tyler Parq

uette organized his Aladdin themed asking to match this year’s homecoming theme of an Arabian night.

He asked longtime girlfriend Kylie Hsu on Oct. 5 with a poster saying, “Will you let me be your Aladdin and show you a whole new world at Homecoming?” During his asking, four friends of Parquette carried Hsu on a board made to resemble a magic carpet. She was lifted through the hallway above crowds of students and was set down next to the band room, where Parquette was
waiting with his poster and a bouquet of flowers.

“I was honestly trying not to fall off, but the guys were all my friends so I trusted them,” Hsu said. “Last year they did a fake kidnapping so when I turned and saw his friends I was like, ‘oh no…’ in a joking way of course. It was super cute and I thought it was so sweet how he thought of the whole idea of the magic carpet instead of just holding the poster.”