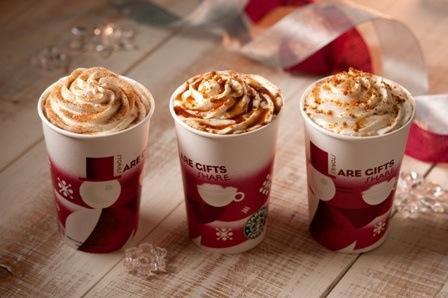 Once cold weather hits, the hot drinks come out. Mega coffee shops Starbucks and The Coffee Bean offers its own special set of holiday drinks. These drinks are not for the avid coffee fan as they tasted more like sugar and spice rather than caffeine.

I tried the traditional Peppermint mocha and original hot chocolate from Starbucks. The supposed Peppermint Mocha had a distinct lack of mocha and tasted more like peppermint than anything. To me it tasted exactly like a liquified candy cane. I preferred the hot chocolate since it was exactly what I expected: a sugary, chocolatey drink.

The Coffee Bean came out with their own version of the Peppermint mocha, but I had their Ice Blended version, which is similar to the frappuccinos at Starbucks. It had the exact same flavor as its Starbucks counterpart but it had a lot more whipped cream.

I also had the Chestnut Praline Frappuccino, which was like a nuttier version of the Caramel Frappuccino. The chestnut flavor highlighted the coffee flavor and it was a step up from the Peppermint Mocha. Topped off with extra whipped cream, to me, it was what a coffee milkshake should taste like.

On the other hand, the Eggnog Frappuccino was an interesting combination, but it was definitely not my favorite out of the bunch. The strong taste of eggnog is not something I like with my coffee but it was probably the drink that screamed “the holidays are coming” the most.

The Caramel Bruleé Latte tasted  most like actual coffee out of the five drinks I sampled. Although I would ask for another shot of espresso if I were to order it again, it gave me the most caffeine for what I ordered. It was not very festive since it was essentially a caramel latte with no special peppermint or gingerbread twist.

I tried one of The Coffee Bean’s holiday latte’s, the Cookie Butter latte, as well. It tasted quite bready and was a very heavy coffee. I enjoyed the coffee but it did not really taste anything like the cookie spread it is named after.