Families rally for extension of bill 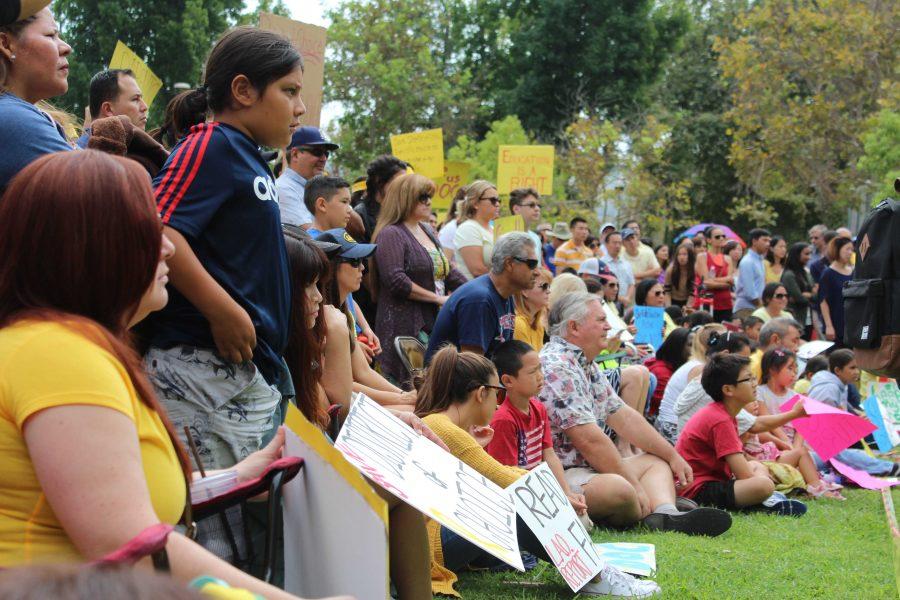 In response to the soon-to-expire District of Choice bill (SB1432), families from school districts all over Southern California attended a rally at Maple Hill Park in Diamond Bar on Saturday to support the extension of the bill, which has been in effect for over 20 years.

Over 500 parents and students from the Walnut, Glendora, West Covina, San Dimas and La Verne districts were dressed in yellow to protest the expiration of the bill. They were joined by the Diamond Bar High School drum line and Walnut High School band.

State Sen. Bob Huff, creator of the District of Choice extension bill, spoke, along with district Superintendent Robert Taylor.
“We have about 50 school districts that are impacted,” Huff said. “Many of these districts are very small rural districts that absolutely go out of existence without this program. My bill, SB1432, is dead. AB1771 is currently in Senate Rules, and that bill is a slow death for District of Choice.”

Several student and parent speakers also spoke out against the compromise bill (AB1771) proposed by Appropriations Committee Chairperson Lorena S. Gonzalez–which will allow current out-of-district students to stay but ensure that future ones will not be permitted to freely transfer–along with the assemblywoman’s refusal to respond to their attempts at communication.

“Hundreds of us have wasted our opinions on our social media platforms and we haven’t gotten one single answer,” DBHS alumni Rochelle Sun said at the podium. “If anything, Assemblywoman Gonzalez has deleted our voices.”

Parent Lily Eibert, whose children attend school in their home district of Walnut Valley, emphasized that the loss of this program will affect all families regardless.

“For most of us, this is the first time we’ve ever contacted our legislators. We don’t know what they’re doing up in Sacramento, but they’d better not be playing politics with our kids and our education. We want to make sure that if a new bill comes in, that it does not die in [Gonzalez’s] committee, and we want to make sure that it goes to a vote. Let the people’s voice be heard,” Eibert said.

Various interpretations of the result of the end of District of Choice have been suggested in the past few days, but according to Superintendent Taylor, if  the AB1771 bill is passed, District of Choice students of WVUSD will only be permitted to stay until they leave their current school, whether it be elementary or high school.