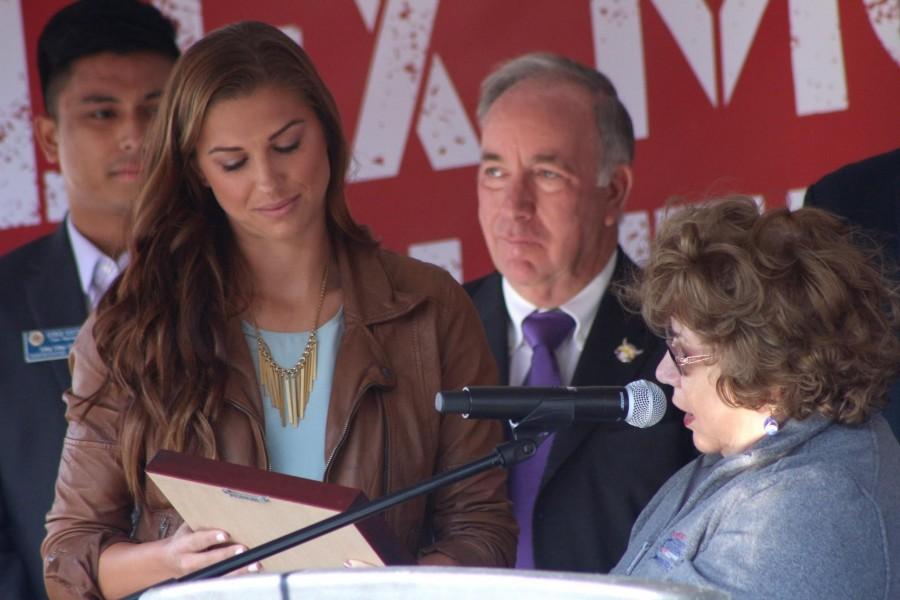 Having grown up in Diamond Bar, Alex Morgan is not only a hero to the city, but a national star. On Saturday, the city of Diamond Bar cheered on Alex Morgan, as she returned to her hometown to receive the first ever key to the city.

The key to the city is the highest honor presented by the city council and is given to an individual who has accomplishments that reflects well on the Diamond Bar community. It has taken the council five years to make this event possible.

“The purpose of this event today was for the city council to honor Alex Morgan as the hometown hero and to receive the first key to the city, for her accomplishments,” Deputy City Manager Ryan McLean said.

Before the Morgan’s arrival, the city set up a variety of booths. Volunteers gave out drawstring bags, ribbons, and cheer sticks with Morgan’s name printed on everything. There were numerous soccer-related carnival games, an airbrush tattoo booth, and even bounce houses. In addition, children  received numbered wristbands, for a chance to win a meet-and-greet with Morgan after the ceremony.

“We wanted to give the community an opportunity to share their appreciation for what Ms. Morgan’s done on behalf the community,” McLean said.

At around 11 a.m., Morgan arrived at Pantera Park and was escorted onstage by the Diamond Bar High School Drumline members. There, she received numerous awards for her accomplishments from the city council, Walnut Valley School District, and Diamond Bar AYSO commissioners.

State Sen. Bob Huff, Assemblywoman Ling Ling Chang, DBHS Interim Principal Denis R. Paul, and DBHS Athletic Director Kevin Ferguson were just a few that were up on stage to present the awards. In addition to the awards, Morgan received a Diamond Bar soccer jersey from AYSO, and in return, gave the city council her soccer jersey with the official FIFA logo that she has worn for the last couple months.

“I can’t even begin to explain how appreciative I am to have you guys supporting me every day,” Morgan said from the  stage. “It’s really amazing to be part of a community that supports each other; a community that I feel so much a part of.”

During her speech, the 2007 DBHS graduate spoke about all the memories that flashed back to her while visiting her hometown. She also talked about how the day before marked her 100th game with the national team, and the Olympics that she’ll take part in this summer in Rio.

“I have this remembrance forever that I’ll always have a piece of Diamond Bar with me,” Morgan said.