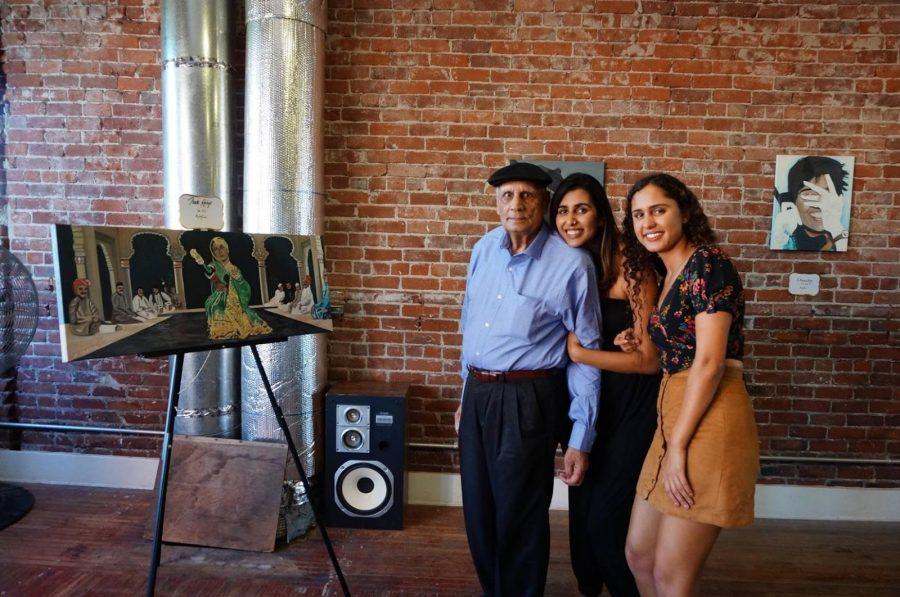 Simar Cheema, right, with her grandfather and sister, by her painting of Meena Kumari.

Many talented artists only dream of having their work displayed in front of many people, but for Simar Cheema, this dream became a reality. In September, the Diamond Bar High School senior’s art was featured as a part of the monthly Pomona Art Walk.

Every second Saturday of the month, from 6 to 9 p.m., an art walk is held in downtown Pomona to support local artists.

There are multiple galleries displaying the work of local artists, as well as live performances, food trucks and various venders.

Cheema attended the art walk in March with her family in search of a gallery to showcase her work. She spoke with the manager of the Loft on 2nd, who was willing to display her work at a future art walk. Cheema contacted the manager later, and they arranged for her work to be displayed at the September walk.

Last month, Cheema had 16 pieces on display: six sketches and 10 acrylic canvas paintings. Cheema says that she draws inspiration from her passion for hip-hop, as well as influences from her culture. Her artwork gives her another platform for expressing herself.

“I get to show things that I don’t really get to show at school, like how I have a really big passion for hip hop…and also things from my culture, like Bollywood actresses and things that I grew up watching with my grandma,” she said.

Among the pieces Cheema displayed were portraits of Biggie Smalls and Kendrick Lamar. She also created a piece portraying Bollywood actress Meena Kumari, which took her about five months to complete. Cheema said that she was pleased with the results.

“[Kumari’s] sitting there, and she’s got this really beautiful expression on her face, and her hands are very graceful, very traditional. Just looking at it all, I like how it came together.” Cheema said.

Cheema said that she had a positive experience participating in the art walk.

“Seeing how many people had come to the show and how amazing it was to have people compliment you like that, it doesn’t happen that often, so I was just so blown away,” she said.

Cheema took art class in middle school and fundamentals of art during her freshman year. After that, she pursued art on her own but didn’t show anyone until last year.

Cheema said that while she loves art, she isn’t planning on pursuing art as a career.

“A lot of people think that I should pursue [art] as a career, but that’s never what I wanted to do,” she said. “I just like it because it gives me another outlet. It’s a different form of expression.”