Should Students Recite the Pledge of Allegiance? PRO/CON

Do you think the Pledge of Allegiance should be mandatory? Vote down below!

In recent years, the Pledge of Allegiance has become a source of controversy rather than a decree of patriotism for our country. Our flag salute is constantly being castigated as an unnecessary part of our educational curriculum—one that supposedly infringes the First Amendment right of the Constitution and draws prejudices against other religions. Yet, despite these accusations, saluting the flag of the United States of America is in no way a violation of rights; it’s simply an act of patriotism.

The American flag has long played an important role in representing our nation. Thus, abstaining from saluting it would be committing a huge disservice to not only our country, but also to the millions who have fought to protect our rights and secure our nation’s beliefs in battle.In 1943, the Supreme Court ruled that the Free Speech Clause protects students from being forced to salute the American flag and recite the Pledge of Allegiance in school, meaning that students can voluntarily choose not to participate during the Pledge.

Although California, along with a few other states, doesn’t mandate the recitation of the pledge in schools, it is still a necessary part of American tradition and should not be taken for granted.

Many also make the argument that the act of pledging allegiance to a country is characteristic of fascist regimes. Before 1942, America adopted the Bellamy salute, which bore a similar resemblance to the Seig Heils given during Nazi rallies, in which the right arm is extended in the air with a straightened hand. It is only a coincidence though; our nations shared similar gestures, because we both adopted this salute from the ancient Romans. Nonetheless, President Franklin D. Roosevelt rewrote the Flag Code to the customary hand-over-heart gesture.

Congress added the phrase “Under God” to the pledge during the Cold War to make further distinctions from the American nation to that of the communist, atheistic Soviet Union. Since then, many have attempted to remove the presence of those words, demanding that the pledge be banned in schools on grounds that it discriminates against other religious beliefs. Yet, in this case, standing or even saying the Pledge of Allegiance is a choice one can make. If students feel as though the flag salute is discriminatory, they can choose not to participate because saying the pledge is completely voluntary and thus, there is no reason to get rid of it.

Here in Diamond Bar High School, reciting the pledge is a rare occurrence. It may be said once a week—that is, if USB remembers to include it along with the announcements. This inconsistency causes many students to overlook the value of the pledge.

Pledging your allegiance to the flag of the U.S. should be considered an obligation. Yet, the vast majority of us disregard this amongst many other things we take for granted on a day-to-day basis. To eliminate the Pledge of Allegiance completely from our schools would be removing a piece of American history—one that, along with the national anthem, will fade in due time if not taught to the future generations.

Even though the Pledge of Allegiance is not announced every Monday in Diamond Bar High School, there are still teachers on campus that make students recite it every day in class. The words are ingrained into our minds but, are they really necessary? With its religious discrimination and eerie similarity to the actions of totalitarian states, this nationalistic oath has become a subject of controversy.

Two words, “under God,” have especially raised the most debate over the pledge. Originally, the pledge, written by Francis Bellamy, did not include any religious references. The words “under God” were not added until June 1954 by President Eisenhower and a joint resolution of Congress as part of the Cold War anti-communist movement. However, these words favor only certain religions, even though America is a diverse country with citizens of various cultural and religious backgrounds. Moreover, separation of church and state should prohibit the words “under God” in school. Also, if the First Amendment supports all religions, it shouldn’t discriminate like it does in the Pledge of Allegiance. The pledge, in contrast, references only one deity.

Although the West Virginia State Board of Education v. Barnette case deemed forced recitation of pledge in schools to be unconstitutional, there are still instances where students face consequences for refusing to partake in the oath. In one instance, according to the Tampa Bay Times, a fourth grader from Explorer K-8 School did not recite the pledge on 9/11 due to his religious beliefs since Jehovah’s Witnesses are forbidden from worshipping objects. His teacher took his hand and forcefully placed it over his heart despite his protests and told him that as an American he had to salute the flag.

“In my classroom, everyone will do the pledge; no religion says that you can’t do the pledge. If you can’t put your hand on your heart, then you need to move out of the country,” the teacher reportedly told the class, according to several students. She was suspended for five days without pay and instructed to attend diversity training.

The U.S. claims to be a country of freedom and democracy, yet it pressures and somewhat forces students into reciting the Pledge of Allegiance from childhood, almost brainwashing them from a young age before they even have comprehension of politics, religion or American history. Children should at least know what they are getting themselves into before swearing such immense loyalty to a flag and country.

Many students, including myself, feel peer pressure to recite the pledge because we’ve been trained since childhood to robotically say the pledge from memory and to conform to the patriotic ideal. However, I do not feel comfortable swearing complete loyalty to a country built upon slavery and oppression of native people that promises in its pledge “liberty and justice for all,” especially since many injustices and forms of discrimination continue to run rampant in its borders today. While I still feel pressured into standing, I refuse to place my hand over my heart and recite those words.

10 Responses to “Should Students Recite the Pledge of Allegiance? PRO/CON”

The College Board announced that the national AP Awards will not be given out  this May. According to its website, the purpose of the removal is “t...

As a first time voter in the 2020 presidential election, I know that it is vital to not simply vote along party lines but to thoroughly understand the... 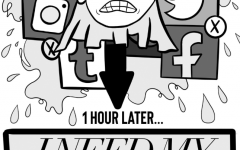 Eye of the Editors: Highschooler’s ignorance to reality

Social media apps are some of the biggest platforms for reaching audiences around the globe. Because of this, more and more international and domestic...

In today’s media landscape,  people are constantly trying to keep up with the variety of streaming services that are available to consumers, the on...

In order for a natural-born U.S. citizen to run for president, he or she must be at least 35 years old. This age requirement was put in place to ensur...

CON: Demonstrated interest only achievable by some

The college admission process is like no other, and students are constantly trying to do the things they believe  a college will favor to get accep...

Students may already know that some colleges take into consideration “demonstrated interest,” a measure that doesn’t correspond with the applica...