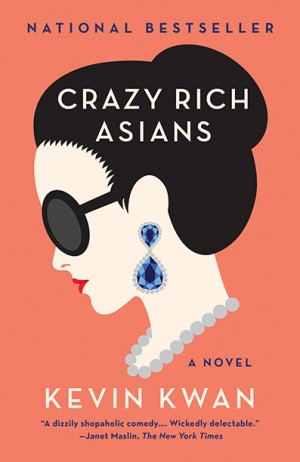 When you hear the word, “billionaire,” no doubt the first person that comes to mind is either Bill Gates or Mark Zuckerberg. However, in “Crazy Rich Asians” (and the soon-to-be-released sequel, “China Rich Girlfriend”), author Kevin Kwan tells the stories of a group of Chinese billionaire families living in Singapore, having escaped the Communist regime of China decades ago and quietly built up their fortunes over the years.

While some may have heard of more popular novels about Chinese culture like the incredibly moving, “Chinese Cinderella” or “The Joy Luck Club,” both of which discuss traditional Chinese customs and values, “Crazy Rich Asians” is a whole different ballgame.

The central plotline is focused around Nick Young, a former socialite who escaped to New York to experience the “real world,” and his girlfriend Rachel Chu, who has never encountered this type of wealth before because she was born to a single mother Chinese immigrant. When Nick takes his down-to-earth girlfriend back to Singapore to meet his family, all of Singaporean society is thrown into a frenzy, because Nick is one of the most eligible bachelors out there. From there, we meet his mother, Eleanor Young, and her circle of friends, all of whose children are also connected to the story. This story is extremely complicated, but is definitely worth reading.

One of the central themes of this book is “East vs. West,” which is clearly evident through the beautiful, contemporary neighborhoods the characters live in, contrasted with the traditional ways of thinking. For example, even though Eleanor Young has spend millions of dollars perfecting her house, she practically faints at the idea that her precious son will spent the rest of his life with a “commoner.”

From the beginning to the end, I was swept up in a frenzy of glitz, glamour, and gossip. The story is told in a “Game of Thrones” fashion, in which there are a relatively large group of characters, each with his or her own storyline, which all of the different plotlines link together through familial relations.

This style of storytelling creates its own problems, as I had some difficulties remembering characters’ names and who they were connected with. However, the intriguing plot more than makes up for my memory deficiencies. Like I mentioned before, these characters are rich. Filthy, stinking rich. These people have wealth beyond all imagination, and basically control the entire country of Singapore through their connections and money.

Additionally, I was extremely appreciative of the way the author incorporated Chinese terms into the dialogue. The common use of exasperated sighs (“Aiyaaaah”) and filler words like “lah” (the Chinese equivalent of “like”) really created a dynamic sense of the characters’ tone that made me laugh on more than one occasion.

Overall, this is one of the most exciting, funny books I have read about Chinese culture and society. The sequel, “China Rich Girlfriend,” which I have already read after receiving a review copy from the publisher, is scheduled for release on June 16.