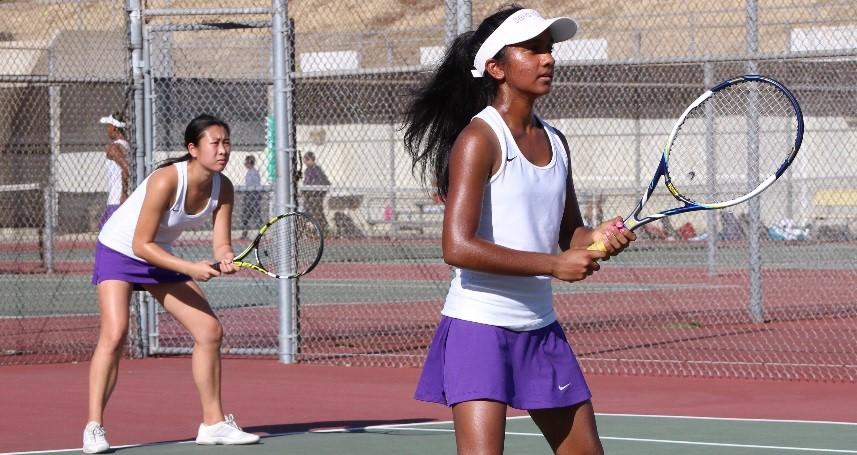 The sound of encouraging yells and reminders overlap with the thud of tennis balls throughout the Diamond Bar High School tennis courts as the players of the DBHS girls varsity tennis team practice for their next match.

The team is currently 1-3, having lost its league games against Ayala, South Hills, and Claremont, but winning the match against Bonita. Head coach Tina Shavers believes the team can still turn things around.

“The team as a whole is growing and making a lot of improvements,” Shavers said.

Senior captain Emily Zhang said that having better teamwork will play a large role in improving the team’s overall strength. With the doubles and singles players switching out constantly, it is difficult to forge strong teamwork between partners she said.

However, absence of solid teamwork is not stopping the girls from becoming accustomed to the new positions and getting to know their partners in order to play better.

Developing new chemistry between doubles partners has benefitted the team by allowing the Lady Brahmas to try something different than the strategies they had last year according to Zhang.

“We’re in it to win, and we definitely see more wins in our future,” Zhang said.

Improving their serves, volleys, and strokes is a priority that the team has been working on to secure more wins later in the year according to sophomore Angeline Cheng. The girls primarily want to work on staying consistent and winning both their doubles and singles.

The team has had several good strokes during games as well as strong efforts from players seniors Samantha Cho and Emily Dang, who the team relies on for solid points.

However, the Lady Brahmas must continue developing and growing as a whole in order to score more and win.

“We are improving our weak shots and we are doing our best to enjoy the season and have more fun,” Shavers said.