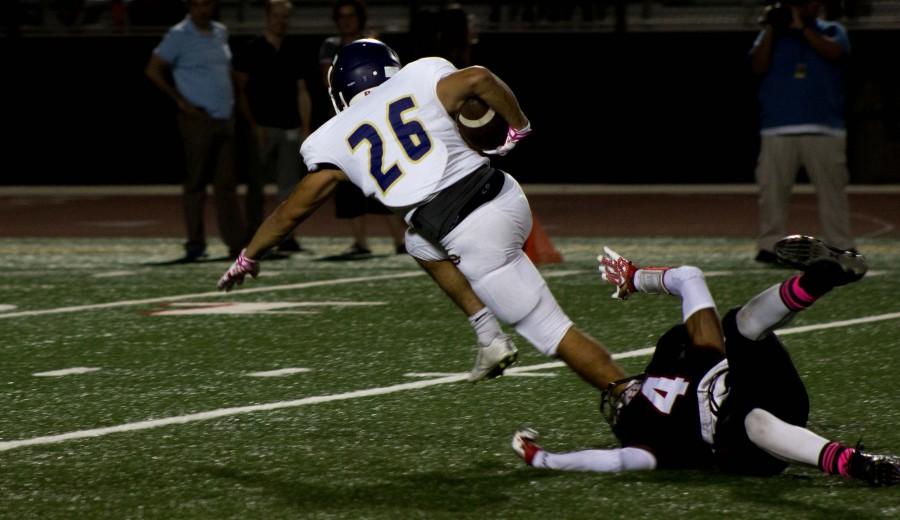 The Diamond Bar High School football team lost their first league game of the season Friday against the Ayala Bulldogs after the Bulldogs turned the game around in the last quarter with the touchdown to win 28-21.

The Brahmas put up an impressive fight; they managed to come back from a 14-point deficit, eventually taking the lead in the third quarter. However, that wasn’t enough to secure the win for their first league game.

Ayala scored within the first three minutes of the game with its first offensive play, but suffered a loss when its middle linebacker was injured on a play,  leading to a 15-minute break.

Ayala rebounded from the injury, continuing to display offensive strength. With about a minute left in the quarter, the Bulldogs scored again on a 30-yard touchdown. The extra point made it 14-0.

The tables turned during the second quarter after a false start by Ayala, which would lead to a fumble recovery by Diamond Bar on the 16-yard line. Junior quarterback Grant Mestas scored a 1-yard run on fourth down, bringing the score, after the extra point, to 14-7.

The game remained at a standstill through the rest of the quarter, though the Brahmas came close.  Ayala prevented the Brahmas from scoring by intercepting the ball in the end zone with only six seconds left in the half.

The Brahmas started the third quarter with a 23-yard run by senior Kyle Yada, bringing the ball to the 15-yard line. Senior running back Dimaggio Rico took advantage of the opportunity and, a few downs later, scored on 4-yard rushing touchdown, tying the score. The Bulldogs attempted their own long run and tried to pass, but an interception by junior defensive back Jaime House stopped Ayala from scoring.

Diamond Bar would score again after a 94-yard passing touchdown from Mestas to Yada, pulling ahead of Ayala 21-14. But that lead wouldn’t last long. It would soon be followed a punt return touchdown by Ayala, tying the score.

Ayala scored the final touchdown of the game with nine minutes left in the contest to pulling ahead of the Brahmas for good. After wide receiver Connor Donohue dropped the pass on Ayala’s 18-yard line on the fourth down with only three minutes remaining in the game, it became difficult for the Brahmas to gain a foothold over their opponent.

“It’s a process and it’s going to get tougher, but we just have to improve,” head coach Marcus Hughes said after the game.