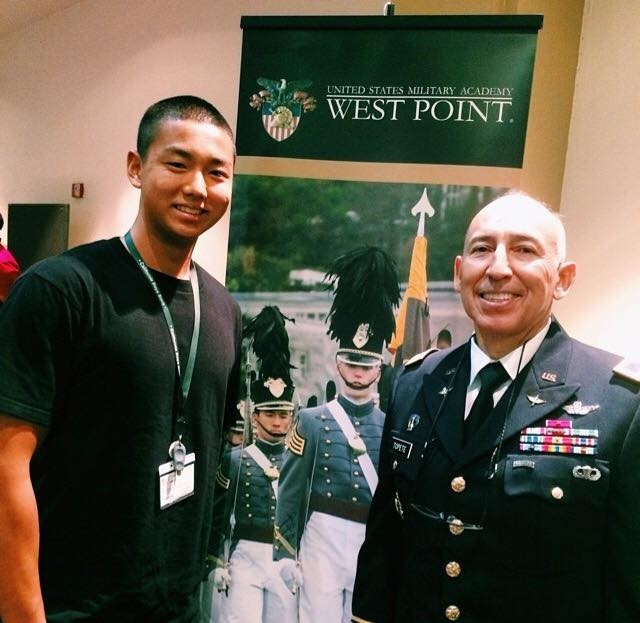 Faith. Dedication. Service. The path that led senior Caleb Lim through the almost impassable doors of West Point is emblazoned with these three words.

Lim was admitted to the prestigious Army academy earlier this month. His acceptance was a fulfillment of his dream of becoming a soldier, which blossomed as a kid.

“I’ve always wanted to be a soldier. I played war as a kid, and I found honor in service. I realized West Point was a place where I could use my God-given talents and skills to my maximum potential in the field,” Lim said via Facebook.

As determined as he was to become a service member, the process was long and arduous; Lim decided to join the military near the end of his sophomore year, later than most kids.

“Most kids decide they want to go to West Point at an early age, and their parents begin prepping them for the academy during middle school with activities, clubs, and sports so their resumes will look stacked,” he shared.

To make up for lost time, Lim took the initiative to educate himself by talking to as many people as he could regarding service academies. He notified his GLC, Sonja Burns, who connected him to a local West Point liaison officer. Upon contact, the officer gave Lim a several hour brief on the entire application process.

“I had to do a physical exam, fitness exam, eye exam, plus my online application, on top of that get a congressional or senator’s nomination,” Lim said.

“Although I was discouraged I didn’t get into the West Point [program], I had a great experience at the Naval Academy summer seminar. It gave me a lot of insight on academy life, classes, schedule, meals, and people,” he shared.

The prospective cadet was faced with another hurdle when he was initially denied entrance to Boys State, a highly competitive summer leadership and citizenship program sponsored by the American Legion for high school juniors.

“I turned in my application early, but they didn’t give me an offer and said it was too late, so Mrs. Burns argued on my behalf, and I gained a spot last minute. It was the hand of God working,” he said.

Lim has been actively working as a Boy Scout, starting from the seventh grade, hoping that his dedication could be directly translated onto his application. Last year in January, he became an Eagle Scout, the highest rank attainable in the scouting program. He then went above and beyond to be the first of his district to earn an Eagle Palm, an award that represents additional recognition for an Eagle Scout who has stayed active in his unit.

Similar to any other student, Lim had to keep up his grades and do well on the SAT, but social interactions played a key role in his acceptance to West Point.

“I [attended] congressionally held service academy nights, [and had] dinner with people from West Point, the Air Force Academy, and the Naval Academy. [I also attended] Korean- American West Point clubs to meet the students there. The connections I’ve made and kept helped me a lot because I left good impressions and they were able to see that, and some even put in good words for me,” he said.

Burns was equally pleased on Lim’s acceptance to West Point.

“He is an outstanding student who challenges himself in multiple AP and honors classes. He’s definitely one of the top kids,” she said. “I actually had tears in my eyes when he came into my office and told me he was going to West Point…. He’s known he wanted to go to West Point since he was a little boy and he has just worked his tail off to get to where he is now.”

Lim admitted that his brother, Diamond Bar High School class of 2008 alumnus Joshua Lim, was a big influence in his decision to join the military.

“My greatest inspiration was my brother. Growing up, I always looked up to him, did what he did, played with his friends, and wanted to be just like him. I even wanted hair like him. He went into Marine Corps training, and when he came back home, he was a changed man. He changed from a college party boy who didn’t listen into a respectable, composed young man, and I admired that change,” Lim shared.

However, the future second lieutenant’s ultimate decision to serve stemmed from the philosophy he lives by.

“I admire the act of growing stronger, so I set a motivation that I wanted to place myself wherever I needed to achieve the strongest version of myself. I hope to grow stronger as a person in all aspects of life. I hope to glorify God through all this. My direction in life is hopefully becoming an Army Ranger and possibly moving on to more advanced levels of Special Forces units. I plan on making a career out of my service,” Lim said. “This is all far down the line, but these have been my initial goals and motivations. Success isn’t money or income. To me, it’s finding fulfillment in maximizing my potential for the benefit of others. I firmly believe I can do that at West Point.”

Lim gave a message to underclassmen who wish to walk the same path as him.

“Never be satisfied. Wherever you are, whatever you’re doing, however you’re doing it, you can always do more, be more, and gain more. Stay humble, stay hungry, and use common sense.”

“My decision to apply began when I was first introduced to the academies my eighth grade year. I was in search of an institution that was more than just books or sports. I wanted to attend a university that I knew would help me develop into the person I wanted to become. When I heard of West Point, I found myself immediately drawn to the school. Long story short, I went through the whole process of nomination, interviews, and even a summer camp to apply. I had hope that if admitted, I would become a part of something greater than I could ever imagine, a leader and officer in the United States Army. To be completely honest I am still in shock! To be accepted into an institution such as this, is a complete honor. It hasn’t hit me yet but I know the second I leave for Cadet Basic Training, I will begin a new journey in my life.”

The first in three years to enlist into the Marine Corps after high school, three Diamond Bar seniors have decided to dedicate their post-high school years in serving their country.

1. Ricky Chuang – “There is more to life than just being in school and studying hard, especially with how competitive DBHS is. I want to experience what the real world is like both inside the country and outside of it even if it requires me to go out onto the field. I want to make a man out of myself and do it while serving God and country. I will earn and hold the title Marine till the day I die. Just remember, keep your options opened and do not be afraid. Do well in school, but it is not everything. Pursue what you are passionate about and do not let anyone discourage you from doing it, unless it is bad. Better to fail trying, than to fail to try.”

2. Ray Shane Dui – “I joined because I wanted to be part of something bigger than myself. I also wanted to gain a new view on life as well as expand my learning opportunities to places beyond the classroom. Joining the Marine Corps was a huge decision for me and I encourage others to enlist as well, not only for themselves but for country and for family.”

3. Harrison Lin – “I have always wanted to live my life out, to challenge myself against life’s tides; that is why I chose to join the best of the ranks.”