Ahn the Rise to Success 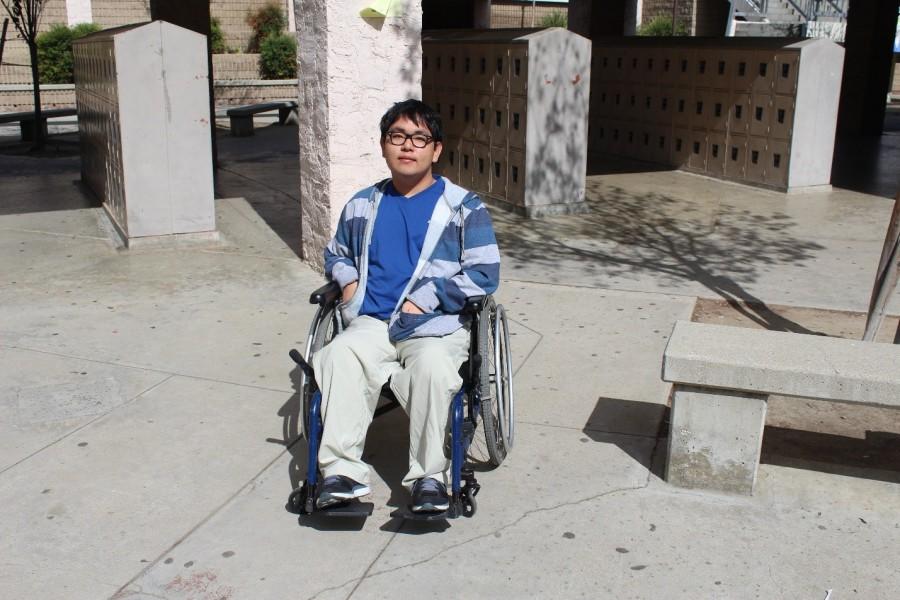 Strolling among a sea of students, Diamond Bar High School senior Kyu Seo Ahn is noticeably different from the rest of the crowd.

Diagnosed with Charcot-Marie-Tooth disease (CMT), Ahn cruises around campus in a wheelchair. The condition, which affects both his motor and sensory nerves, is one of the most widely inherited neurological disorders in the world. Though despite having this disability, Ahn has been able to make the most out of his high school career, exceling in academics and immersing himself in what he enjoys most: public speaking.

As a senior, Ahn stands by his valedictorian status and will be attending Stanford University in the fall, majoring in economics with intentions of going to law school.

Yet it wasn’t until entering through the gates of high school that Ahn decided to become the motivated individual he is now. In fact, all throughout middle school, Ahn recalls being a relatively defiant student.

“The biggest problem I had before high school was that I was always felt separate from everyone else, I acted out a bit because of that,” Ahn said, “Being in a wheelchair and having that image of being separate even though people tried to be accommodating was very impactful.”

However, seeing his older sister with the same disability attend the University of California, Irvine and later, transferring to Harvard University, spurred Ahn to abandon his rebellious disposition. Thus, he began to challenge himself in school, just as his sister did.

“I thought to myself: Oh man, she can do this—my sister is so great. She did this despite having a disability,” Ahn said “So I wanted to see what my full potential is–I tried harder in school and became more reserved when it came to acting out in class.”

Immigrating to America at the age of six, Ahn lived without his parents for a period of two years, an experience that instilled maturity early on to his childhood life. “[Immigrating from Korea] made me grow up quicker.” Ahn said, “Being in this new environment without any sort of familiarities and not having my parents around definitely forced me to mature faster.”

With public speaking as his main interest, Ahn is heavily involved in DBHS’s Mock Trial team, an activity that has impacted his high school career immensely.

“I love arguing. Even when I was young, I was always a big talker,” Ahn said.

Being a devoted member for two years, Ahn has developed close relationships with the Mock Trial team, feeling as though the team has become his “family outside of his family.”

Ahn shows great admiration for Mock Trial advisor Latitia Thomas, who has given him guidance to improve as an overall speaker.

“[Kyu Seo] is one of the greatest speakers I’ve ever met,” Thomas said, “He has a natural presence when he speaks.”

While Thomas acts as Ahn’s Mock Trial advisor she is also his AP Statistics teacher and Class of 2015 Class Committee advisor.

“What’s amazing about Kyu Seo is that he likes to sing. He’s really good at karaoke because he is not embarrassed to be bad. He’s also very funny and thoughtful. But he’s also very obnoxious and swears too much,” Thomas said.

As a talkative individual who enjoys voicing his opinions amongst a crowd, Ahn is also the co-founder and vice president of DBHS’s Debate club. He believes that debate not only makes people good speakers, but also helps create a better understanding of the world.

“Through debate, I gained a more worldly perspective which is what I wanted to have particularly in Diamond Bar because I feel that the people here live in a super bubble,” Ahn said.

Ahn is also involved with Class of 2015 Class Committee. Being an officer for the past four years Ahn has served as secretary and treasurer for the club and is passionate about supporting his graduating class.

As an outgoing and academically distinguished student, Ahn retains a vivacious energy that resonates with everyone he comes across.

“I have this problem, but I’m just going to deal with it. And I do deal with it because I don’t let this disease define me.”