When I walked into Diamond Bar High School on the first day of school, I expected to feel changed in some way. After all, it’s high school, the “prime” time of your teenage life. Something had to be different, right? Well, here’s a word of advice: without taking the initiative on your own, those thoughts of change are comprised mostly of wishful thinking.

As a freshman, the only difference you will experience is the cluelessness and constant confusion that accompanies being in some place completely new. In the end, you are still the same old you.

I am still finding myself adjusting to various aspects of DBHS. In the beginning, all I could think about was how the teachers had different standards, the classmates had unfamiliar faces, the school campus was like a foreign country, and I was completely surrounded by a countless number of competitive peers, more so than in middle school.

There is a phrase one of my teachers takes great satisfaction in repeating, and I feel it bears the cold hard truth, “Freshmen are fresh meat.” I agree with this statement, especially when it comes to being involved with school. You’re raw, straight from middle school, and you’ve still got that laid back middle school attitude.

During junior high, I never felt the need to delve too deeply into various school activities such as clubs, sports, or volunteering. I simply did what was required of me, mainly homework and studying. I went to any lessons my parents had signed me up for, and didn’t pay any attention to what was going on in school besides my own classes. Not surprisingly, I expected myself to do the same thing in ninth grade. That was probably the worst possible idea to have at the time.

The start of my year went without a hitch, until I realized how little I understood about what was going on at DBHS. Listening to my friends mention their volunteer opportunities, sports tryouts, music auditions, and officer interviews absolutely flabbergasted me. As an inactive individual, I consciously felt more insignificant and lousy than ever before. My close friends involved themselves in school by meeting new people and forming connections with teachers and upperclassmen. What was I doing? Apparently, nothing.

It was at the end of first semester that I decided to make a change in my daily routine. I considered joining a sport – it seemed exciting enough, so I tried out for badminton. Much to my surprise and delight, I passed the tryouts and made it onto the team. Then I thought to myself: “What if I volunteered at shelters through a club?” It wouldn’t hurt to participate, so I volunteered. I don’t regret it at all, because I now have community service hours accumulating every week. Here was my biggest decision of all: What if I tried to get into the Bull’s Eye, our school newspaper? I was a bit intimidated after my initial applications and interviews, but any uncertainty I had was brushed aside when I discovered I’d been accepted. By making a move to become involved at school, I met many unique people who inspired me to reach for even more as well as gaining a ton of experience regarding my social skills and time management.

The majority of high school students will have most of their free time available during freshman year. Knowing this, I’d planned to just relax when I was setting up my schedule. However, I am now using that time for meaningful hobbies and productive projects. There’s always this nice feeling of accomplishment whenever I know I’ve completed something to the best of my abilities.

From what I have collected based on my first year of high school, I know it would be in my best interests as a sophomore to take action even earlier. Therefore I can improve myself even more so than before. 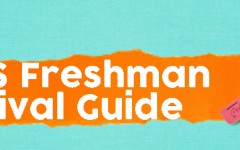