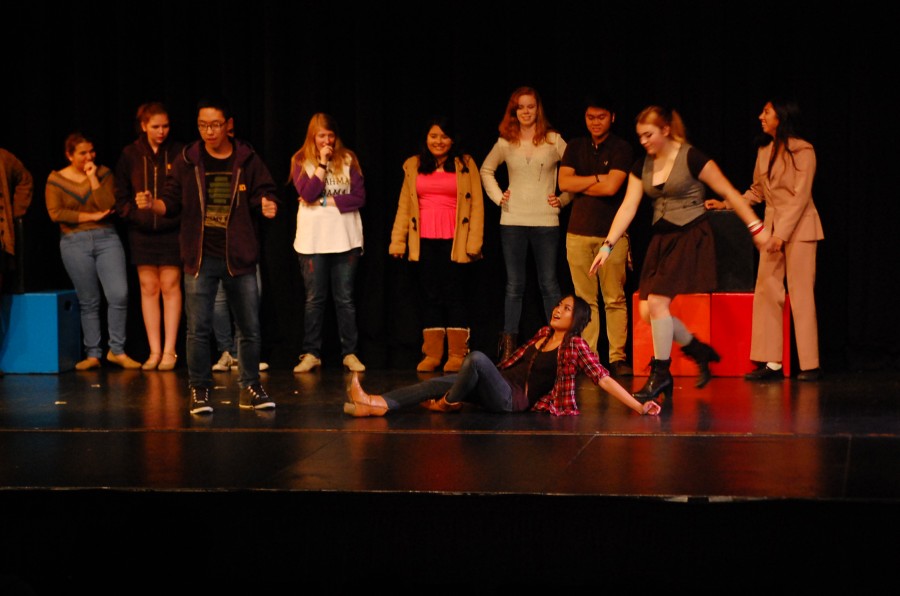 There were few laughs to be enjoyed during Diamond Bar High School’s first Thursday Night Live production of the year. With a cast made up of Advanced Drama students, you would expect to see a lot of enthusiasm and energy being put into their performances. However, I often found myself disinterested by many of the skit’s unoriginal plot lines and unamusing performances.

The production opened up with an improv segment called “Freeze Tag,” in which the whole cast lined up on stage making up scenes on the spot and “tagging” other cast members to participate. Being the first scene of the night, I was quite disappointed, as their performances failed to capture my attention.

However, two actors stood out, Colleen Sam and Matthew Aquino. Their performances in “Tilted Neighbors” were the most entertaining of the night. In the skit, Aquino portrays a serial killer named Chuck who stumbles upon an obnoxiously nosy and meddlesome neighbor, played by Sam, in their apartment laundry mat. I found that their interactions were very naturally played out, unlike most of the skits where the acting was unnecessarily exaggerated and overdone.

Another skit that caught my attention was “Special Friends” in which seniors Jessica Pierce and Amanda Beltran flawlessly portrayed blow-up balloons to which actor Matthew Aquino affectionately used as “friends.” Though the skit didn’t include dialogue, Aquino’s comical and humorous actions towards his “friends” made the performance fun, lighthearted and infectiously funny.

Although I enjoyed watching the drama students display their talents, the skits were disappointingly lacking in humor. Skits such as “Simply Gum,” “The Whiners,” “Coming out Lobster,” and “The Chicken Joke” were relatively bland in both acting and plot progression, causing me to become detached from the scene, very quickly.

The setting of the whole play consisted of just a few boxes on which the actors sat on. There were, of course, the occasional doors and tables being used, but overall the minimal amounts of props made everything look too simplistic.

Although I did enjoy a few aspects of TNL, many of the performances failed to maintain my attention. Most of the skits were missing the “wow factor” I had seen in past drama productions.