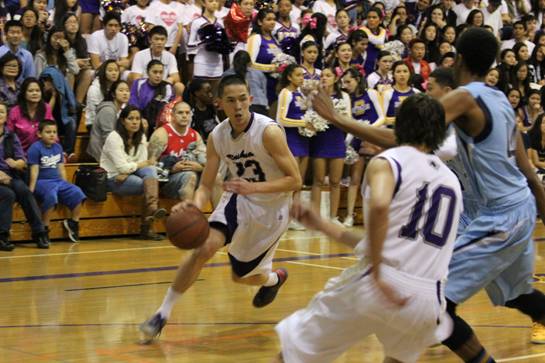 As the buzzer sounded on Valentine’s Day, it not only ended the classic rivalry game in a loss for Diamond Bar against the Walnut Mustangs, but also concluded the regular season. The Brahmas failed to capitalize on their must-win mentality motivated by their previous loss to the Mustangs, losing 55-45 and finishing 8-4 in the Hacienda League.

The atmosphere of the game was lively from the start. Both sides of the crowds were cheering as the tip-off began and chants of “defense” were heard from the outside of the gym.

The first quarter was neck and neck, as both teams were hustling for every loose ball. The intensity of the defense of both sides was high. However, as DB struggled to get past Walnut’s center Richard Rycraw, who had many blocks and key stops throughout the game, senior Leo Li had many clutch shots to keep the Brahmas in the game. One thing the Brahmas were able to do was get to the free throw line consistently, which allowed them to score easy points. The first quarter ended with a score of 9-8 in Walnut’s favor.

The Brahmas started to fall apart in the second quarter. Turnovers were a problem DB could not fix throughout the game. With Walnut increasing its intensity level on defense and the Brahmas making bad passes, DB found itself in a hole. As senior co-captain Christian Manalo and Li struggled to score, junior Mustang guards Jeff Huang and Zuri Williams took advantage as they scored easily against the lackluster DB defense.

However, remembering that they climbed out of a bigger ditch in the previous Walnut match to keep that game close, an unrelenting group of Brahma seniors made sure DB took a turn for the better coming out of the second half.

Whatever the coach said, whatever the seniors told their team, it worked. The offense flowed smoothly and Li started to get things going. Both senior co-captain Bobby Meshesha and junior Tyler Peterson played well in the third quarter. Peterson had defensive stops which were converted into easy points. The Brahmas narrowed down the Walnut lead to 33-31.

“We got some great senior leadership. The seniors did not want to go out poorly so they just played their hearts out,” head coach Henry Frierson said.

The red hot Brahmas kept the momentum rolling as their defense remained intact. As Manalo and Meshesha got to the free throw line a couple of times, DB found itself leading at one point in the game. However, turnovers doomed the Brahmas.

Toward the last minutes of the game, the duo of Williams and Huang scored to increase Walnut’s lead. A three pointer from Walnut’s sharp shooter, Rob Harrelson, sealed the game.

Although it was not a victory, it was a loss to be proud of as the Brahmas displayed an audacious effort against an undefeated Walnut team. It was an arduous yet successful season for DB as it finished second in league, something that has not been done for over ten years.

“We overachieved and we are really proud of the guys and looking forward for next season and the youngsters,” Frierson said.