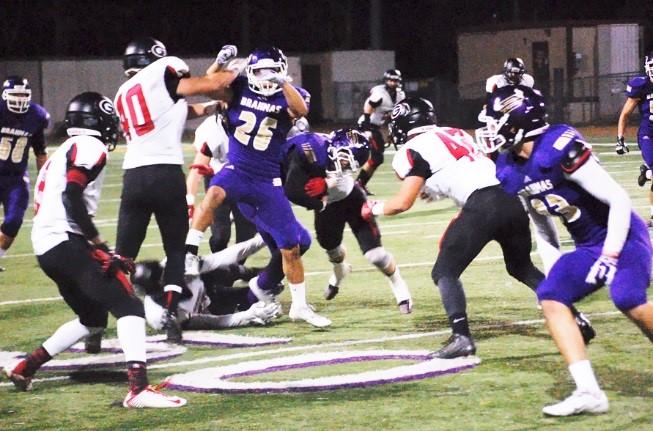 The Diamond Bar football team is having a season that it would rather forget. Even though they started the game off on the right note, the Brahmas’ offense could not keep up with Glendora quarterback Matt Fink and Co.,losing 38-6. DB, which has lost six of the last seven games, has an overall record of 3-6 and are 0-4 in the Palomeres League.

The Brahmas were aggressive from the start of the game. On a short third down play, senior Antonio Hull, at the quarterback position for the injured Tyler Peterson, managed to find an open seam between his right guard and tackle and sped past the Glendora defenders for a 55-yard run. Hull finished the game with 204 rushing yards on 25 carries. On the same drive, the Brahmas stuck to their run-first mentality and ran many zone-read option plays. After being held at the goal line for three straight plays, senior running back Isaiah Thompson scored the first touchdown of the game on a fourth down at the three yard line, giving momentum to the Brahmas. However, these were the only points the Brahmas managed to score for the rest of the match.

Fink, an All-League quarterback with a football scholarship offer from Boise State University, took control of the game for the rest of the night; the Tartans scored 38 unanswered points. Fink, barely pressured, finished the game with 250 passing yards and three touchdowns. Glendora, which is first in the PL, also has another Tartan that has a collegiate scholarship. Offensive tackle Ben Northup is currently committed to Hawaii University.

Even though the game seemed like a blow-out on the stat sheet , the Brahmas, with their passing game not working, had many explosive runs throughout the game. DB stuck with their run-first strategy and completed 266 rushing yards.

It has been a tough season for the Brahmas and for head coach Marcus Hughes, who is in his first season at DB. The Brahmas do not have that much depth compared to other high schools and once the number of injuries started piling up, things went downhill for the Brahmas. Senior quarterback and co-captain Tyler Peterson, who was injured in the game against South Hills, did not suit up for the match against the Tartans.

Throughout the season, the Brahmas had key players from both sides of the ball making plays consistently. On offense, Hull now has 1216 rushing yards with a total of 14 touchdowns. On the other side of the ball, senior defensive lineman, Jason Kim, is currently second in the league with 4.5 sacks.

“I believe that our team had a great season. Even though our record does not reflect that and even after all the misfortunate injuries that occurred during league, I’m glad at how our team overcame adversity and still worked to play strong,” Kim said.

This Friday, the Brahmas are having their annual Parent Night game against the 5-4 Ayala Bulldogs.