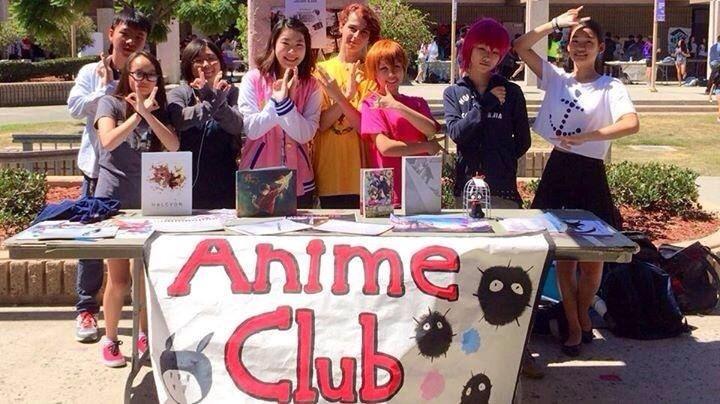 Anime Club members pose for a picture during Club Rush at their booth.

Armed with their circle lenses and outrageously colored hair, members of Diamond Bar High School’s Anime Club have been expressing their passion for Japanese cartoons since the 1990s.

Every Friday afternoon a group of students flood towards room 507 during lunch and gather to watch and discuss their favorite Anime episodes.

“I love anime because it’s what I can turn to when I need to relax. Even though it gives me so many feels. Anime can make me laugh to tears or literally sob over fictional characters,” junior Kitty Wang said.

Bringing students together with one common interest, Anime Club allows Brahmas to freely express their love for Japanese cartoons on and off campus.

“What I like about anime club is that nobody judges you there. It is common for many people to think that anime are for kids and weirdo’s but because everyone in the club shares similar interests, we all respect each other,” senior Ryan Seo said.

Every week, Anime Club officers post a specific theme on their Facebook group page, allowing other members to respond with posts that relate to the theme. Members can post videos, gifs, and photos, and the member with the best post wins a small prize.

“Pretty much any form of media is okay. Of course, they have to be appropriate for school, and spamming isn’t allowed,” Wang said.

This year, Anime Club has around 60 members and is looking to expand their range of activities on campus. The club has recently done a collaboration with RED Club, showing an animated Japanese movie called “Spirited Away” to raise awareness about human trafficking. The money earned from that event goes towards anti-human trafficking organizations.

“Anime Club brings together so many people, it’s just filled with people that have this one common interest, and we can talk about it forever,” Wang said.

Like most organizations on campus, Anime Club celebrates holidays with parties. particularly Halloween is that members participate in cosplay contests.

President of Anime Club junior Danielle Narciso enjoys how cosplay allows her to try out new styles and act out different characters.

“It’s a really nice feeling when you earn recognition from people who see your costumes and ask for photos, while complimenting you,” Narciso said.

Within the club, members find a close bond with each other.

“I love everything about Anime Club, but my favorite part is the members,” junior Adeline Lee said. “Our club members are admittedly a little awkward, but I think it’s the mutual awkwardness that brings us together.