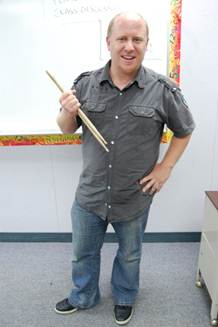 Daniel Gorden (Mr. Gorden) One couldn’t find a finer example of someone who has the best of two worlds than Daniel Gorden, a Diamond Bar High School teacher who currently teaches during the day and performs in various gigs at night. He has been making a living as a professional drummer since age 19 and still holds that career today, playing for various events from school plays to professional musicals.

An expert in the music industry, Gorden has experienced both sides of music-related career—he performed in bands and also worked in the business aspect of the industry, at one point holding a position as an accountant at Warner Brothers Records.

Gorden took all the music classes his college offered. He then majored in Music Business at Cal State Northridge to widen his range of expertise related to music rather than pursue a path as a performer.

“To be a professional musician, you don’t need a degree…when you get hired to play in bands, they don’t care if you have [one]; they care if you can play,” Gorden stated.

Throughout college, Gorden was an excellent student as well as an ambitious performer. He mainly played freelance, taking one performance at a time, and still continues the same career today—playing in high school show choirs, musicals, churches, club scenes, and sometimes rock bands that need a substitute.

One of his most fascinating experiences as a performer was being part of an Australian Christian rock band for three months on a U.S. national tour. They were on the road in a fifteen-passenger van and performed on a day-to-day basis, not knowing what to anticipate the next morning.

“We would stop by at a church and play for thirty kids, and then the next day play for like five thousand. Sometimes we would sleep on the side of the road, and the next day someone would put us into a Hilton. It was a crazy contrast,” Gorden shared.

Gorden’s love for music and his profession will continue to be an unwavering driving force to further him in his career. “Playing in a rock band in a really good scene is just as fulfilling as playing in a really good musical or choir concert… but I think my favorite part about music is being able to pass the torch to the younger generations of people. I can vividly remember myself as a young guy in elementary school, going to watch a junior high concert and seeing someone play a solo. I remember thinking, ‘that’s what I want to do that with my life’… and so I pursued it,” Gorden said.

If one had known Mr. Tietz before he worked at DBHS, he or she would find it hilariously ironic to discover that Tietz had become a teacher. Having spent a major portion of his life as a rock star, Tietz seems like the last person to hold a teaching career; however, with the help of fate, he has now found himself in the place he loves most—in his classroom.

Also known by his stage name Tony Deerfield, Tietz accomplished the task of forming a band called SkyPark with three friends at age 16. The band was signed to the well-reputed record label Epic Records, sold over 70,000 records, and performed in more than 30 states and four continents during its career.

Tietz began his career as a musician when his mom had a vision that he would become a rock star and told him to drop out of high school in Chicago to start a band in Los Angeles.  He moved to Northridge, California in 1994, then to Fullerton where he met the three friends, Tyrone, Joey, and Keith, with whom he formed the rock band SkyPark.

The band never really “broke into” the radio or sold millions of records like big name stars, but they were still asked to perform in numerous states and even around the world.

Tietz admitted that being a relatively unknown band had its advantages. “We would live normal lives and still get to tour the world and have a lot of fun,” he stated.

For three years, SkyPark worked fulltime—recording, writing music, and performing all over the world. That life came to a halt in 2003, when the band’s singer decided to go solo and the group dismantled. Deerfield, who was financially stable, found an ad to teach at a private school and applied right away.

“I had no idea how to teach… I was professionally doing something I didn’t know how to do. But even though I was horrible at it, I loved the challenge of doing something impossible,” Tietz said. Years later, he applied for and received the position as a French teacher at DBHS.

Tietz no longer plays music professionally, but continues to participate in other activities related to music, coaching students who have the ambition to go on that route themselves.

“We were very fortunate to have wise people coach us through those years—people who’ve been through a lot, seen everything, basically, at their expense [and] invested in us…to the point we realized the importance of relationships over pursuit of fame,” Tietz stated.