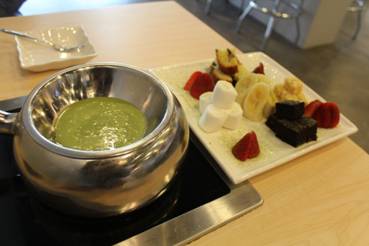 What first prompted me to dine at Yojie Japanese Fondue was news of its green tea fondue. Because of this, I had initially thought that the restaurant was one that served solely desserts, and was surprised to learn that it was in fact a hot pot style eatery.

The restaurant itself is located in the Hmart plaza near Diamond Bar High School, just right next to Rite Aid. The interior decoration of the restaurant is very simple and modern, with a few pieces of abstract art hanging on one wall. The whole front of Yojie is glass, and although it made for a nice presentation, I was constantly blinded by the glare reflecting off the car parked in front of the store.

The menu consists of different amounts and types of meat with a choice between shabu shabu (hot pot style) or sukiyaki, which is similar to the former but has a soup-like base. I ordered the shabu shabu with Angus beef and found the taste to be quite commonplace. The two sauces that came with the dish were the main sources of flavor and tasted like the typical hot pot flavorings; there was nothing that good or bad about them and I believe these two sauces can be found at almost every hot pot style restaurant. I have, however, heard from a friend that the sukiyaki was a very unique and delicious selection, and regret not sampling it.

The only two aspects that I thought could have room for improvement were the service and the power of the stove used to heat the pot. My father and I waited around 35 minutes for the food to come and I found this a bit strange because most of the food given to the customers is served raw, and they must cook it themselves. I saw no reason for the delay, unless of course the meat was being treated or thawed in the back. The other aspect was the stovetop that provided the heat for the water. The liquid was very slow to boil and once it did, looked a bit weak. I can only conclude that this was a safety regulation that was placed to prevent injuries, especially since the restaurant targeted the younger generations. Despite this, I did not encounter any problems when cooking the meat.

Next was the dish that I was especially looking forward to—dessert. Priced at $10, the green tea fondue was the highlight of my experience at Yojie. It came with a plethora of different fruits and pastries on a platter and the fondue itself was a particularly beautiful shade of green. However, after tasting the dessert, I found that it was rather more of a white chocolate flavor than green tea. Upon closer inspection, I noticed a fine green powder on the dipping ingredients and concluded that the fondue was basically made of melted white chocolate and the green (tea?) powder.

Overall, eating at Yojie’s was a delightful experience and well worth the time. I would definitely go back to eat there again, most likely to taste the sukiyaki.