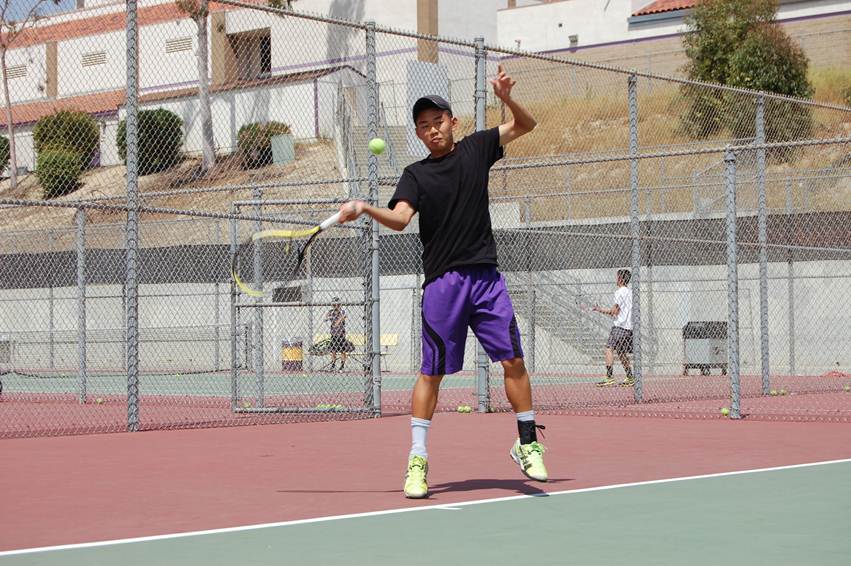 Trailing 5-7 after the second round, Diamond Bar boys’ tennis was able to come back in the final round and tie the Villa Park Spartans 9-9, but the Brahmas were awarded the victory as they won 80 individual games compared to the Spartans’ 73. DB now has a 7-3 overall record and currently sits in second place in the Hacienda League with a 5-2 league record.

“We beat a very good team and this match is a confidence booster,” coach Dave Hamel said. Last year, both DB and VP made it to the top 10 of CIF with VP having a higher rank than DB’s.

The Brahmas turned the game around in the second round as they went on to win three sets. The number one doubles team, consisting of juniors Minsong Hsu and Kenny Sakata, dominated its opponent winning 6-1. The singles team contributed with Yang once again defeating his opponent 6-1 as freshman Garret Musuda was able to bagel his opponent. “I did really well and the team did great today,” Yang stated. However, DB was still losing 5-7. “We did pretty well in the second because the visitor usually dominates the second round,” Hamels said.

In the third round, DB needed to win at least four sets to win the match. Hsu and Sakata were able to win another set defeating their opponent 6-1. “We did not do very good in the first round, but my partner and I was able to get it together and win the next two matches,” Hsu commented. Yang and the number two doubles team of junior James Phan and sophomore Russell Chen also won. With just one more set necessary to seal the match, it all came down to Musuda. With both teams watching the final set of the match, he came up in the clutch, dominating his opponent 6-1, awarding the victory to the Brahmas. “We played to win and didn’t play not to lose,” Hamels stated.

Losing in the second round of last year’s CIF, the Brahmas, consisting of many young players, are determined to go deep into the playoff. The team got off to a rocky start losing twice to the Rowland Raiders but hope to bounce back starting with this match. “We have been focusing on eliminating our unforced errors and everyone is taking charge and stepping up,” Hamels said.