Bands rock out DBHS in ‘Battle’ 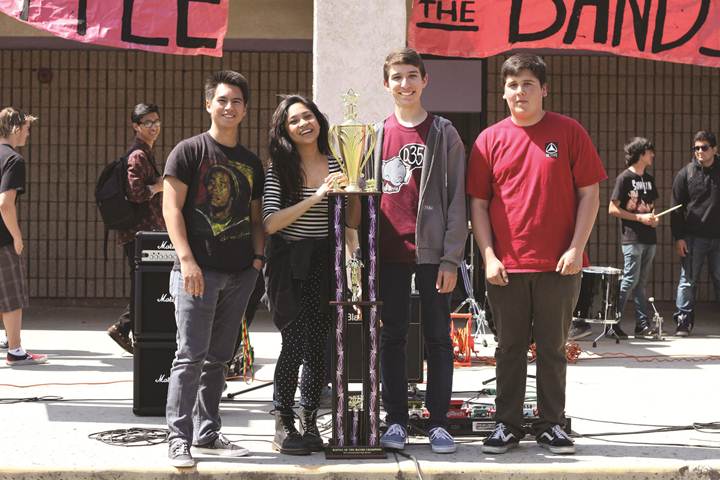 ROCK ON - The four members of Tori and the Berbas proudly stand with the trophy they won after performing “Ooh La La” at the upper quad during an intense week of Battle of the Bands, which was held during lunch.

To the crowd’s shouts of excitement, the band Tori and the Berbas played Grace Potter and the Nocturnal’s “Ooh La La,” earning it the champion title for the Battle of the Bands competition.

The event, organized annually by USB, was held in the upper quad during lunch from Monday through Friday last week. Each day consisted of one to four performances in front of a panel of four to six judges: Dave Desmond, Lauren Osajima-Baird, Tony Tietz, Lorena Piña, Frank DeAnda, George Harderson.

The nine participating bands performed various genres including metal, rock, R&B, and even a calculus song. Ranging from a single soloist to a six-man band, the contestants attracted crowds of spectators who gathered to watch.

Each performance was judged from a score of one to five based on six categories: quality of music, vocals, originality, stage presence, audience reaction, and overall impression.  The top scores determined which three teams would advance to the final round.

“Today was amazing. But I have to give all the credit to the people in my band,” senior Tori Berba, lead singer of the winning band, stated. “Heart Breaker,” the first song performed on Thursday, was rehearsed only a day prior to its performance. Tori and the Berbas’ winning song, “Ooh La La,” was never practiced as a band, which testifies its outstanding talent.

“It feels awesome. We weren’t expecting [to win]. I’m glad that it turned out this way,” junior Steven Gomez, the band’s electric guitarist, stated.

The Symptoms, an all-sophomore rock band that won last year’s championship, also made it to the final round this year. “[Battle of the Bands] was a fantastic experience and the band today was awesome,” sophomore Ram Martinez, The Symptom’s lead singer, expressed. The band displayed great enthusiasm as well as passion that led them to its finalist.  “It feels great to play for others. [Winning] doesn’t mean anything to us. We’ll just play for anybody, at whatever time they need us,” sophomore guitarist Jessie Medrano stated.

The competition was open to anyone who could sing and play instruments. The USB members prepared weeks in advance by sending out applications and advertising the event. During the contest, USB set up the stage with sound systems, tables, balloons, and posters.

“I was really happy with how the events turned out. Our goal is to change people’s high school experience. I really hope we accomplished that with the bands, especially with the band that won,” sophomore   Rochelle Sun, Commissioner of Social Activities, said.