The Real Deets on Tricks and Treats 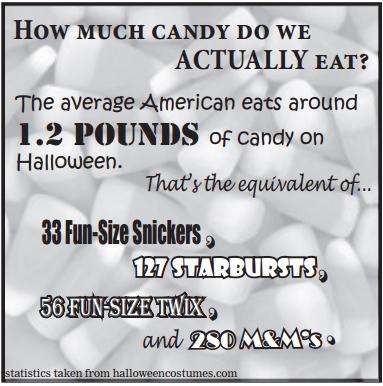 Each year, as the season of jack-o’-lanterns and grotesque scream masks approaches, the same frantic frenzy consisting of dressing up for a free load of treats stirs up the excitement of every child.

Trick-or-treating, originated from a 9th century European custom called “souling” in which Christians walked around the streets praying for the souls of dead people in order to speed up the souls’ passage to heaven. Since then, Halloween has become simply a day to knock on neighbors’ doors for free treats and candy.

It is during this time of the year when I am reminded of my mom’s paranoid voice from that one Halloween night when I was a small, exuberant third-grader.  She cautioned me to never eat candy collected from trick-or-treating unless she went through each and every piece. She explained, in the most frightening details, stories of terrible people who deliberately put in poison, drugs, needles, and other such heinous substances inside candy to poison children who naively consumed them only expecting to enjoy a sweet treat.

Turns out, my mom wasn’t the only one with overly-skeptical beliefs; others have claimed the existence of pretty absurd cases of razor-blade apples, heroine-laced candy, or cyanide-filled pixie sticks.

These beliefs of poisoned Halloween candies, although quite probable, are nothing but myths that cause many anxious parents to panic. In reality, there has never been a single record of anyone who intentionally added drugs into candy during Halloween or any victim who suffered from such a crime. Only one related case involved a father who purposely tried to poison his son.

Now that you know that such claims are false, you can fearlessly gorge on all the sweets you desire accumulated from trick-or-treating!

But for those who still fear the possibility of tainted candy, there is a solution – if you are willing to fly long distances, that is. A hospital called Samaritan Lake in Moses, Washington has been inviting parents and children for the last 20 years to run their treats through an x-ray machine to detect any physical contamination. This should alleviate any remaining troubled minds out there.