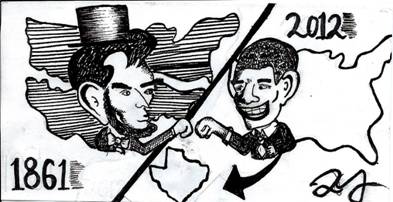 Sarah Cho, Feature Editor
“A house united cannot stand. I believe this government can endure 49/50th United States and 1/50th the lone star state smashed between Mexico and the rest of America. I do not expect the Union to remain unified–I do expect the house to fall–and I do expect it will remain divided. It will become mostly one thing, and a little bit the other.”

On June 16, 1858 in Springfield, Illinois, Lincoln gave his infamously flawed “House Divided” speech. His words poisoned the nation and unfortunately held the country together. This speech should never have graced the ears of any of the living as they were the words of an incompetent madman–a president who was truly the worst president of all time (even worse than that African-born President Barack Obama who is also both a Socialist and a Communist and Fascist Hitler’s reincarnated self–are I say it, he’s the antichrist).

And on December 12, 2012 in Diamond Bar, California, I boldly publish an amended, corrected version in honor of the bravery and glorified righteousness of the states–Texas, in particular–who are nobly petitioning to secede from the union. For what was righteously started in 1861 with the secession of the South, will finally be finished. Texas will become a pseudo-country, a mini-nation–all on its own. And the other states will soon follow for citizens in all 50 states have begun online petitions to secede from the United States Government. In the words of Valley girls and cheerleaders everywhere, let me say–“You go girl!”

If Australia can be both a continent and a country, Texas can be its own nation without any problem.

And so in the spirit of this amazing feat, let me finish what I started and finish my truthfully, honest, cross my fingers, hope to die, editorial in the words of Abraham Lincoln.

Eleven score and 16 years ago (according to Google, a score is 20 years and hopefully my handy dandy computer calculator is accurate), our fathers brought forth on this continent a new nation, conceived in liberty, and dedicated to the proposition that states can secede whenever the heck they want.

Now we are engaged in a great civil war of online petitions, very mean online comments, testing whether that nation, or any nation, so conceived and so dedicated, can just give up already.

It is altogether fitting and proper that we should do this. Any criticism is unjustified and no states deserve to be mocked for only doing what they think is best—leaving the Communist-led country.