Blazing Trails of Satire: Curse of 2013, The Cause of Everything 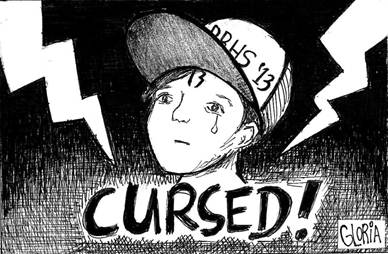 At DBHS, many people regard us seniors as the most unlucky group of students on campus. And actually, no one blames them for pitying our class. Heck, we sometimes pity ourselves. After all, it was Class of 2013 that never got to experience a new shiny gym at Chaparral Middle School, attend a Sadie’s dance, have seven classes in our schedule, or take AP Rhetoric as juniors or AP Chemistry as sophomores. “Getting the shorter end of the stick” would not do justice to all the unfairness we Class of 2013 had to endure over the past years. But I’ve finally found the reason why.

There have been stories, movies, and TV shows written about all kinds of horrible things the number 13 brings to people, but we were all too ignorant to anticipate this problem. It was right there and we didn’t see it… how stupid and oblivious of us. After six years of elementary school, two years of middle school, and four grudgingly long years of high school, it has finally hit us. Class of 2013 at Diamond Bar High School is under a horrendous curse, and there is no getting out of it.

The evil goddess of fate decided to toy with our emotions by taking away everything good in our high school lives. The construction of a brand new multimillion dollar gymnasium built right after some of us graduated from Chaparral was our first omen. We were foolish to think that it was merely by chance. Shortly after, we found out that Sadie’s dance was canceled indefinitely, and we weren’t given any explanation. But who is there to blame? Come on, think about it. We have enough talented and motivated student groups on campus to put the event together, seemingly more than enough budget (in fact, the school earns money from ticket sales), and a state-of-art gym to host the event. There is absolutely no viable reason why we cannot have Sadie’s at DBHS. Doesn’t that explain it all? The school administrations are mere victims of this supernatural curse! They refuse to give us this highly desired event, simply because this powerful curse forbids them to.

Oh, and AP Rhet. Let’s not even go there. The school administration was probably desperate to let us take AP Rhet as juniors, but the darn curse! So as soon as we became seniors, they were freed to let the succeeding class take AP Rhet. Not only that, they began to let certain sophomores take AP Chemistry after we became juniors. That speaks volumes about how much they’ve wanted to offer more AP classes to underclassmen all this time. Bless our younger generations who aren’t affected by the curse.

So please don’t point fingers at the school administration for being, for lack of a better word, submissive to the power of this curse. You all read “Harry Potter”—you can never block a curse. Once you’re hit, you’re gone! Oh, that’s right, I forgot about Harry. He survived the curse. But that’s because his parents dearly loved him and cared about him.